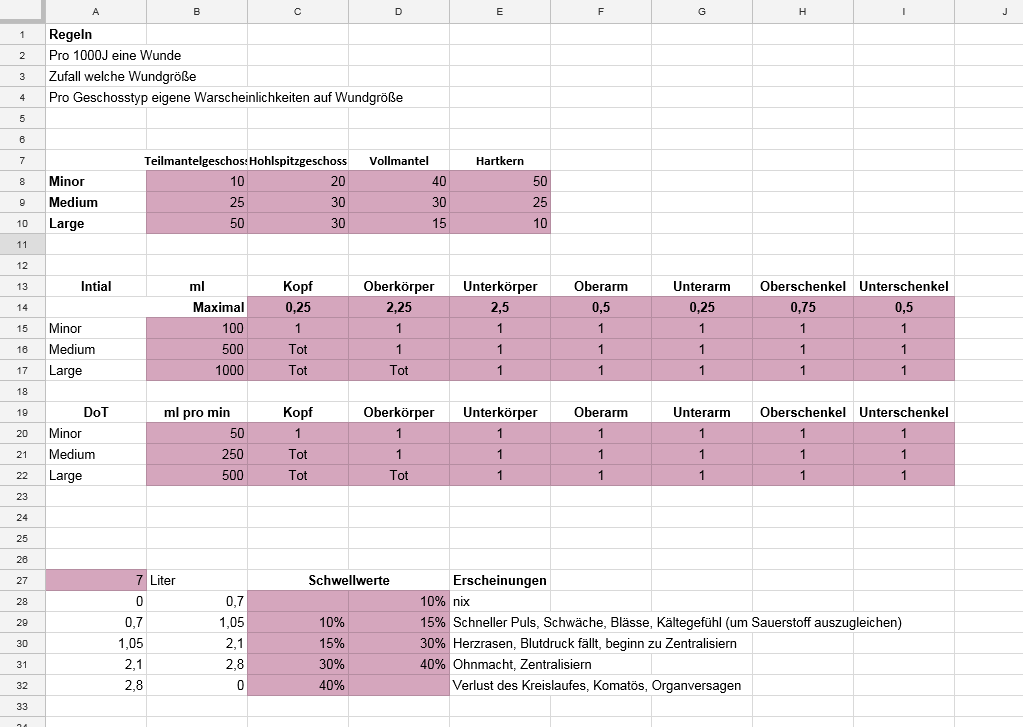 One of the Project Goals is to enable the experience of a real gun fight. In order to reach that goal, it is important that the player believes that he is very vulnerable. He needs to fear his own death. The other goal is a realistic simulation of weapon behavior that includes the attempt of translating the precalculated impact energy of a round into real injuries.

And that’s what this system is going to do.

As this system should to be a very simple one, I was going to create a simple ruleset first of all. In real life, the human organism is bound to its blood circuit. It consists of an amount of blood that transports oxygen to the organs. And that is the critical part on the battlefield. If the combatant runs out of blood he will ultimately loses his life. Other injuries like a damaged liver or muscles of the limbs are critical too but they aren’t that critical in time than an urgent blood loss is. That is why I focused on that.

3546 Joule of Impact Power to start with. That equals to rounded 4 wounds. As it is a Full Metal Jacket round, each wound has the possibility of being 40% a minor, 30% a medium, 15% a large or 15% no wound. I assume the result is two minor and one medium wound. The fourth did no wounding at all. I although assume that it was a hit to the head. Corresponding the ExcelSheet, it leads to:

As the player wasn’t hit bevor, those two little scratches aren’t any kind of harmful to him, but:

Because there are two exceptions to the rule of blood loss and its consequences: The heart and the brain. Hitting them result to an instant death regardless of any other circumstances. Both are represented by a simple “death” in the sheet for head and upper body.

At this point, we have the ability to die instantly and if not, the amount of blood loss. To reach the first milestone, this should be all to have some fun for one evening. I left it there and subtract the instant blood loss value from the maximum, which leads to death, if the maximum exceeds a value of zero. This shouldn’t be the right behavior, but the player will not have an indicator of this ruleset in the first milestone and according to that not able to get a clue of being tricked.

The only hit feedback right now is the cest logo of the UE4 mannequin, as it changes its color responding the blood volume left. The Logo is green at 100%, decreases to full yellow at 50% and dims down to red till 0%.s

As I don’t want to restart the map/server each time a player dies, I also included a simple respawn system. It gathers all player starts of the level and spawns the player incrementally. If reached the last player start, it begins from the first spawn again.

Missed out features are subject of upcoming versions.

–       Correct circumstances to die
(the player should black out at 40% of blood loss already)
–       Minimum viable Product:
(This concept is not confirmed, so I left out some features)
–    Simple Injuries (that leads to death)
–    Blood loss over time
–    First Aid: The Option to cure/heal